A couple of weeks ago we walked through some fields – with newly sprouted cover crop – to pull out some of the towering (compared to the baby cover crop!) pig weed and lambs quarter. Looking across the fields they looked much better after, though when we were in there we could see plenty more weeds that we may get to at some point. Maybe.

Soon Janaki will be doing trip after trip with the old dump truck full of manure from a local cattle farm. The manure gets turned and composted and turned again and composted some more (a few cycles of that over weeks) and then can get used on fields next year to add rich nutrition to the soil.

Next year, crops will be moved around to avoid being planted in the same places as this year. That way we can avoid disease, pests (hopefully), and the plants can go into fields that have had time, cover crop, and nutrition added back in. Our healthy soil and extra work to maintain it keeps our vegetables healthy, and the farm healthy for years to come.

Janaki has some of the rotating stuff down to a science (I mean spreadsheets), but much of it is still an art. He knows what fields may have low spots that will be wet in spring, and can’t be used for early crops. He knows which ones have heavier, and richer soil that might be good to go to plant into, and which ones might need some organic fertilizer added in. He has a rotation of cover crops that works well for us down to a science too. Bare fields can equal sad soil, and having crops that add organic matter, or elusive nitrogen naturally back into the soil is a must for organic agriculture.

It’s a cycle of wholeness. And it leads to some pretty good whole food.

I wish I could say that everything I eat or otherwise consume follows this same pattern, or puts back what it takes out from the planet. I can’t say that; though I hope to keep moving that direction.
More and more, it is so challenging to me when I think of what things cost on the shelf not always being reflective of how much they really cost from an environmental (yes, that includes humans too!) perspective.

The truth is the cost on the shelf for organic food, or organic clothing (or non-toxic baby mattresses as I’ve found out) is an insurmountable barrier for many people, both here and around the world. I don’t want to minimize that. It’s a real problem.

Conventional agriculture is also a problem. Perhaps many of you have our CSA share because you already know this and are bothered by mono-cropping, pesticide use, loss of top soil and the list of negativity goes on.

Ammonium nitrate.
The elusive nitrogen that all crops (corn needs a lot, for example) require. Ammonium nitrate is one of the fertilizers that gets used around the world, in staggering quantities, in the production of all kinds of non-organic crops.

And it’s a bomb.
I feel like I should say it “can be” a bomb. It’s very often used for agriculture, but it’s also also used in war. And, I’m sure many of you remember exactly where you were on April 19th, 1995.

And in Beirut… does it matter now what the original purpose of it’s manufacture or intended destination was? Does it matter that it *could have been* fertilizer if it becomes a bomb in the middle of a city anyway?

I was living and farming in Waco, Texas when a fertilizer plant 25 minutes north, in the town of West, exploded. At the time it happened, I was video chatting with friends at a cafe, and it was only after the call ended that I realized that I had been half-hearing sirens the entire time through my head phones. When I went inside to return my cup (and to see if anyone knew what was going on), the TVs were all on, and everyone was silent or on phones trying to call friends or family.
You’d be forgiven for not remembering, it was two days after the Boston Marathon bombing.

I had no idea that that plant was up there, and if I would have known I had no idea at the time what ammonium nitrate was. I am sure many (most?) people in Beirut or in the whole of Lebanon didn’t know that tons of the stuff was being, almost randomly, disastrously, stupidly stored at their port.

I think as humans we just can’t keep up with how dangerous our world is. How much danger we add to it. We won’t be able to control storms, or drought, or volcanoes (though our actions surly add to the devastation they cause). But what we can and do add in the way of poisons, bombs… it’s overwhelming.

I wish this could be a swords to plowshares kind of post… but the materials we’re talking about aren’t nearly as simple as hammering metal into a different shape. If only that was the task we were undertaking. Again, so what if it’s destined to be fertilizer if it blows up anyway?

By partaking in the food from your CSA share each week you’re taking steps (and power!) away from the machine that seems to roll along in our world and hurt so much in it’s path. You’re taking steps (and giving power!) to safer, cleaner alternatives. It’s hard to feel like we have much power in the face of such destruction, or in the face of such wide-spread unsustainability, but the power we do have we can wield. Even by wielding your fork.

For the farm crew,

Many of you long-time members will remember the porch at 427 N. 16th Avenue East. The Benson’s have been members since the beginning–before the beginning, actually. Their porch served as a pickup site from 1994 until this year because they were anticipating the sale of their home. It is officially on the market this week, and I promised a number of people that I would pass along the listing once it was up. Since I don’t remember who that was, I’m sending it along to everyone in the hopes that this special place might stay in the Food Farm family: https://s.paragonrels.com/goto/2_IPp 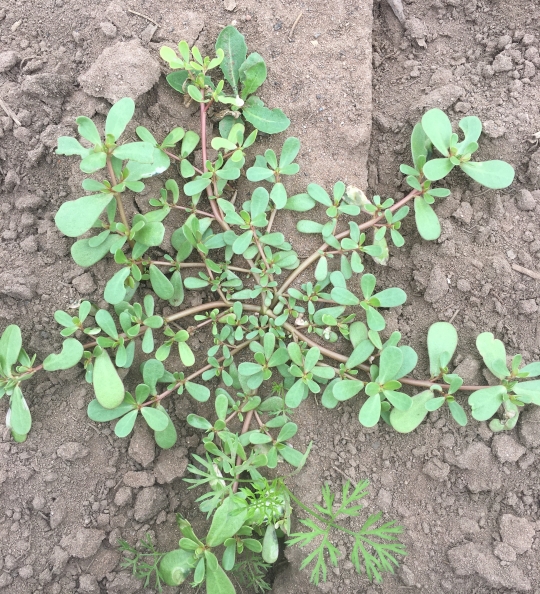 It doesn’t hurt that weeds can be so beautiful.

Can double or triple.

Boil or steam potatoes. Boil or steam beans. If boiling, add plenty of salt to water. Chill beans after cooking in ice water. Salt after steaming/rinsing.

Fold the chopped herbs and radishes, beans, and potatoes once cooled.

Lightly toast mustard seeds on medium low heat in a pan, stirring to avoid burning. Crush seeds in mortar with a pestle. Shake all dressing ingredients together in a jar.

Gently mix dressing into salad, taste for salt. Serve a bit warm, or out of the fridge up to 4 days later.